SPEED is the most advanced software dedicated to sizing electromagnetic electric motors. It includes many different templates to help the user to define the geometry, the winding, the drive and the means of control in order to measure torque, speed, phase current and voltages, losses, etc. 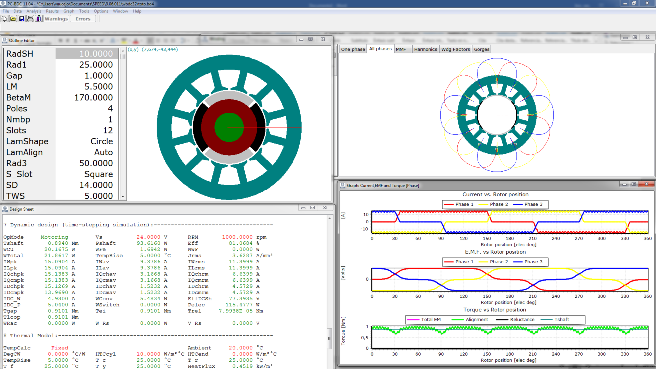 Design of a Brushless Machine with SPEED PC-BDC

Design of an Induction Machine with SPEED PC-IMD

SPEED is a specialized analysis tool for the design of electric machines such as motors, generators and alternators including the drive with inverters and their control. Backed by 25 years of experience within the SPEED Lab at the University of Glasgow, SPEED has 1500+ international users, including leading manufacturers, designers, developers and users of electric machines.

Thousands of machines have been designed with SPEED, and millions have been produced. SPEED is a simple, intuitive, fast and efficient tool for:

Furthermore, its highly organized data in both numerical and graphical form facilitates communication between company sites, and often between supplier and customer.

Finally, SPEED can be used in conjunction with high-powered specialist CAE tools such as FLUX and STAR-CCM+ for the exhaustive analysis of difficult electromagnetic, mechanical, or thermal problems.